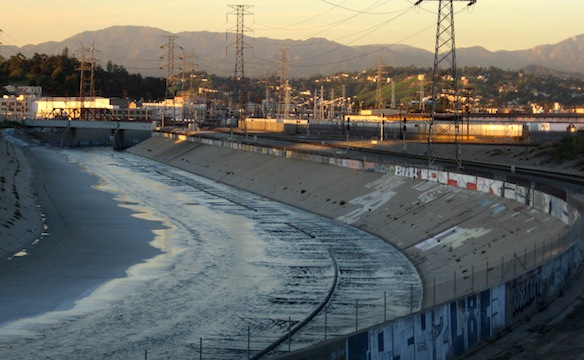 It’s not quite as bad as San Diego’s water, but Los Angeles’ water quality ranks among the lowest of U.S. cities (83rd out of the top 100, to be exact).

This lackluster ranking comes as a result of a harmful cocktail of chemicals in the water that combine to be 4 times more than the recommended number of chemical pollutants.

“Looking at the data, we’re definitely concerned about water quality in Southern California. We recommend utilities really look at their processing. There’s much room for improvement,” said Olga Naidenko, a senior scientist at the Environmental Working Group (EWG), a nonprofit environmental watchdog based in Washington, D.C.

“We recommend residents get water filters

What exactly is so dangerous in Los Angeles’ water?

The Main Dangers In Your Water

. These exceed the federal health standards in Los Angeles.

the water supply via mining runoff, erosion, pesticides and emission from glass production

. Arsenic has also been shown to cause cancer and often contains radioactive elements.

Perchlorate is a component of rocket fuel associated with thyroid illness.

and industrial use. Shown to negatively effect the nervous system and function as a carcinogen

It’s well established that soda is far from healthy. A recent study revealed that the mounds of sugar and calories in soda might not be your biggest concern, however.

Some caramel-colored sodas (think Coke & Pepsi) contain a potential carcinogen, according to a new study from Johns Hopkins University.

Carmel coloring is a food additive which gives dark sodas their colors. This is done through heating and caramelizing these ‘natural’ sugars which leads to them actually changing chemically.

These sugars not only change, but ammonium hydroxide is added to speed up the process. Unfortunately this can lead to the formation of 4-methylimidazole (4-MEI).

Studies of lab mice and rats suggest that 4-MEI can cause cancer, and the International Agency for Research on Cancer classifies it as “possibly carcinogenic to humans.”

These researchers tested 12 sodas purchased in California and New York, and found a wide array of samples containing levels to high of 4-MEI (up to 915 micrograms per liter), with the leaders being Pepsi, Diet Pepsi, and Pepsi One.

Researchers estimated that consumption of the studied drinks could contribute to anywhere from 78 to 5,011 extra cancer cases in the U.S.

After the study, Pepsi released a statement saying they have reduced the levels of 4-MEI formation in their drinks, and all drinks now meet the California standards.

However, the author of this study Keeve Nachman Ph.D, MHS warns that there’s truly no safe level of intake of 4-MEI, and if you’re concerned about this, read the labels and make sure they don’t have any caramel coloring.

Ideally, the Food and Drug Administration (FDA) will step in and regulate this chemical. “What we think makes the most sense is for the FDA to set a tolerance level for the formation of 4-MEI for the caramel color that’s used in beverages,” says Nachman.

Carmel coloring is used to simply change the coloring of your soda, but it’s potentially causing cancer. We recommend you stick to filtered water and make sure you stay healthy!